My attempt at Question 11 from the Haselbauer-Dickheiser Test

Posted on November 26, 2018 by Dimitrios Kalemis

In this blog post, I will study Question 11 from this test.

The question is about a game played in a hexagonal grid.

Below I present the original question for your convenience:

You have been warned and I now consider that you continue to read knowing that what you come across for the rest of this article may forever spoil things for you and/or present strong opinions against this test.

Last warning: please do not read this blog post, unless you are certain that you know what you are doing. If you are not sure, then it would be best if you stopped reading at this point.

OK. If you are here, it means that you want to know my opinion. Well, ok then!

To cut a long story short, my opinion is that the test is highly inappropriate. In this blog post, I will focus on the study of question 11.

Even though I have not really understood this question, I promise you, dear reader, that if you are patient enough to read this blog post, I am sure that you will find it useful nonetheless.

Question 11 is about a fictional game: Quess (I guess the name is coined so that it roughly reminds us of the game of chess). Quess is played on a specific hexagonal grid. In Quess, there may be many kinds of pieces, but we are informed about two of them: Warriors and Warp Gates. From now on, I will denote Warriors as red circles (disks) and WarpGates as blue circles (disks). Warriors may move up to seven spaces (hexagons) in a straight line, unless they encounter a WarpGate, in which case they warp to another WarpGate and continue their path in the same direction. WarpGates may move up to one space (hexagon) in any direction.

We are asked to find the minimum number of WarpGates that allow only four Warriors to attack the entire grid.

If we assume that we want to have four Warriors able to reach any space (hexagon) in a single move, and we want to place the least number of WarpGates to achieve this, why does the question state that each WarpGate moves by only one space? Are we going to be moving WarpGates?

The rest of this blog post will assume that we will place four Warriors on the grid, trying to have them reach any one space (hexagon) in a single move. We will place the least amount of WarpGates in order to achieve that and we will not move any Warp Gate. Now, the question states how each WarpGate moves, but why it does so is a mystery to me. So, perhaps I have not understood the question. So, in the rest of this blog post, I might be solving the wrong problem.

I used the above grid to create the following Quess grid. You can use this Quess grid to try to solve the question.

From then on, I began to solve the problem. Keep in mind that I might be solving the wrong problem, since I have not understood the question.

So, the first attempt I made is the following image, where there are four Warriors and they cover the whole grid except 6 hexagons. Now, if we place a WarpGate in each of these hexagons, then we have the whole grid covered with 6 WarpGates. But these 6 WarpGates are not used for warping, since they are not reachable by Warriors. These 6 WarpGate are only used to fill hexagons. Are we allowed to do that? That’s another question.

Moving on, the following attempt uses 2 WarpGates, but leaves 3 hexagons uncovered. May we fill them with more WarpGates? 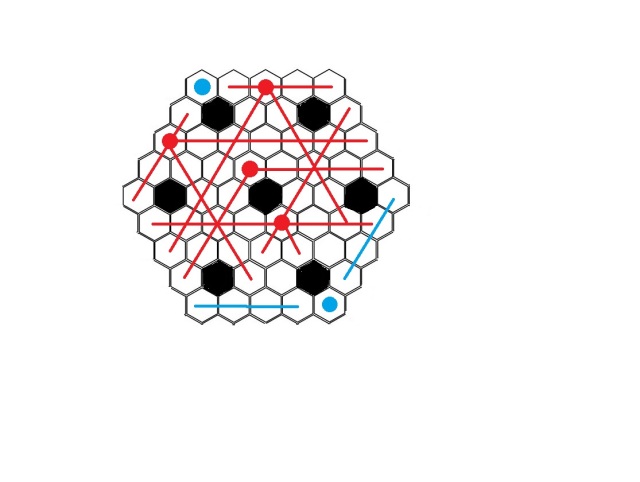 The following attempt uses 4 WarpGates. Here, the whole grid is covered and I present this as a solution.

Here is how the above grid is covered:

If the Warrior from above enters the middle left WarpGate, it will warp to the right WarpGate and continue downwards.

If the Warrior from above enters the middle right WarpGate, it will warp to the left WarpGate and continue downwards.

If the Warrior from below enters the middle left WarpGate, it will warp to the right WarpGate and continue upwards.

If the Warrior from below enters the middle right WarpGate, it will warp to the left WarpGate and continue upwards.

So, with 4 WarpGates, we have covered the whole grid. Can we do it with less?

I am not certain. I doubt that it can be done with 0 WarpGates. What about with 1 WarpGate? Well, once a Warrior enters a WarpGate, it has to emerge from another WarpGate and not the same. So, if there would be a single WarpGate, it would have to be unreachable to the Warriors and it will be used just to fill a hexagon. What about with 2 or 3 WarpGates? I cannot exclude this possibility. All I was able to do is to solve the problem with 4 WarpGates and the solution is in the image above.

Of course, as I have already mentioned, I might be solving the wrong problem.

I guess this is why the creators of the test say that the average person answers less than two questions correctly. They look at the answer submissions. But these submissions are made frantically from people who try to game the system to reveal the answers. So, a person would submit again and again, giving purposely wrong answers to all questions except the one she is trying to guess. This way, using the system as a oracle, she can deduce the answer to many questions that do not have a free form. And most of the questions do not. So, the system can be gamed easily. What the creators of the test witnessed when they reviewed the submission logs were not honest attempts by average people but coordinated attempts by people who were gaming the system and were successful at that, as well. Each attempt had as target to find the answer to only one question, thus all other answers were purposely incorrect. To the creators of the test, this seemed like the people that were submitting were trying but could only get one correct answer at most. The creators of the test got the wrong impression, because they thought that the submissions in their logs were honest ones. Little did they know that a large number of test takers succeeded in gaming and abusing their system.

At least, that’s my theory. When the system was live I knew nothing about it. I never used it. So, I can only speculate as to how it worked and how the submissions of the answers were made.

I am a systems engineer specializing in Microsoft products and technologies. I am also an author. Please visit my blog to see the blog posts I have written, the books I have written and the applications I have created. I definitely recommend my blog posts under the category "Management", all my books and all my applications. I believe that you will find them interesting and useful. I am in the process of writing more blog posts and books, so please visit my blog from time to time to see what I come up with next. I am also active on other sites; links to those you can find in the "About me" page of my blog.
View all posts by Dimitrios Kalemis →
This entry was posted in Education. Bookmark the permalink.